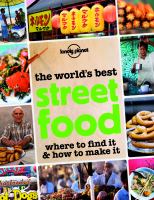 Where to Find It & How to Make It

Lonely Planet's The World's Best Street Food : Where to find it & how to make it! A little known culinary secret is that the world's best sandwich isn't found in Rome, Copenhagen or even New York, but rather, on the streets of Vietnam! The street is where you'll find the heart of a cuisine and its culture - somewhere among the taco carts and noodle stalls, the scent of wood fires and the hubbub of fellow diners.

Bring the world's greatest street foods to your home with this compendium of classic recipes!

100 authentic recipes with simple, clear instructions for perfect preparation Glossary of exotic ingredients with easy-to-find alternatives Evocative profiles of each dish show you where to find the best examples when you're on the road Written by food writers from around the world with an introduction by Tom Parker Bowles

About Lonely Planet: Started in 1973, Lonely Planet has become the world's leading travel guide publisher with guidebooks to every destination on the planet, as well as an award-winning website, a suite of mobile and digital travel products, and a dedicated traveller community. Lonely Planet's mission is to enable curious travellers to experience the world and to truly get to the heart of the places where they travel.

'Lonely Planet guides are, quite simply, like no other.' - New York Times

'Lonely Planet. It's on everyone's bookshelves; it's in every traveller's hands. It's on mobile phones. It's on the Internet. It's everywhere, and it's telling entire generations of people how to travel the world.' - Fairfax Media (Australia)

This Lonely Planet book is the next best thing to taking a trip around the world – without leaving my kitchen. It offers examples of delicious food from around the world, as well as recipes for making these tasty items yourself. There are even substitution suggestions for hard-to-find ingredients. The chai recipe was delicious – if a trip to India isn’t in the cards this year, this will do just fine. (submitted by AA)

Quite the variety of street food, from around the world! I can't wait to try some of the recipes. Most of them will be easily adaptable for my needs.

There are no age suitabilities for this title yet.

There are no summaries for this title yet.

There are no notices for this title yet.

There are no quotes for this title yet.

Loading...
No similar edition of this title was found at OPL.

We did not find this title in the collection. Try searching for The World's Best Street Food in the catalogue to ensure that OPL does not own related editions.