Saved Searches Advanced Search
The library remains closed at this time.  All library material due dates have been extended. Check our online resources or use your For Later shelf to keep track of items you wish to borrow when we re-open. We are continuing to add new digital titles. For the most recent additions search our digital resources directly. Full details
Print 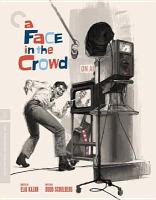 A Face in the Crowd

A chronicle of the rise and fall of Larry "Lonesome" Rhodes, a boisterous entertainer discovered in an Arkansas drunk tank by Marcia Jeffries, a local radio producer with ambitions of her own. His charisma and cunning soon shoot him to the heights of television stardom and political demagoguery, forcing Marcia to grapple with the manipulative, reactionary monster she has created. Directed by Elia Kazan, this incisive satire features an extraordinary debut screen performance by Andy Griffith.
Publisher: [United States] :, The Criterion Collection,, [2019]
Edition: Special edition.
ISBN: 9781681435732
168143573X

This is probably the best acting of Andy Griffith's career. I read his bio on Wikipedia. He started out in music; he was able to use that talent in this movie.

classic that is talked about in college film classes for its theme dealing with the making of totalitarian charismatic political leaders. see also NETWORK; TAIL WAGS DOG; FAIL-SAFE; SEVEN DAYS IN MAY.

1957's "A Face In the Crowd" was, indeed, a decidedly unappealing story that centered around the rise and fall (thankfully) of a power-mad hillbilly.

This film's (unconvincing) bottom line was this - "If the media is behind it, they can turn even the most vile and obnoxious derelict into a mega-star." (Oh!? Really!?)

IMO - "A Face In the Crowd" was, without question, a bona-fide train wreck where actor, Andy Griffiths, as the "Lonesome" Larry Rhodes character, literally, chewed up the scenery, non-stop.

"They're mine! I own 'em! They think like I do. Only they're even more stupid than I am, so I gotta think for 'em. Marcia, you just wait and see. I'm gonna be the power behind the president - and you'll be the power behind me!"-Lonesome Rhodes
I expect we'll be hearing more about this 1957 film more during the Trump era. Director Elia Kazan and writer Budd Schulberg, who teamed so successfully for "On the Waterfront," put together this cautionary tale of media manipulation and populism run amuck. A radio host (Patrica Neal) discovers guitar-playing drunk Lonesome Rhodes in an Arkansas jail and helps make him into an aw shucks TV star who also shills for politicians and companies. Rhodes is played, in a complete departure form his TV roles, by Andy Griffith. He's corrupt, angry, and charming. Neal is equally good as she molds him, but than can't contain him. At times is plays like Elvis getting into politics and at times it plays like a darker, more cynical version of Capra's political films like "Meet John Doe" and "Mr. Smith Goes to Washington." It also suggest what might've happened Co-starring Walter Matthau and, in her film debut, Lee Remick. Despite two comments, Mercedes McCambridge is NOT in this film. Somewhat dated, but a mostly effective and still relevant film. The DVD includes a short doc with Griffith, Neal, and Schulberg that discusses the making of the film and situates it in the context of the 50s (McCarthyism, HUAC). An inspiration for Tim Robbins's film "Bob Roberts."

The accompanying special features focus on post WWII connection between communism and entertainment industries, including the House Committee on Un-American Activities (HUAC) hearings and the Hollywood blacklist.

Andy Griffith is excellent. Unlike anything on his Mayberry or Matlock shows. Good movie, great direction. Holds your interest and doesn't disappoint with a stock ending.

Without A Face in the Crowd we would never have known the acting range of Andy Griffith. He goes from a bum to a big celebrity in this Elia Kazan movie. Kazan picked Patricia Neal, Walter Mathau and Lee Remick to round out the cast. They all work together to make a memorable movie. I doubt you will recognize Andy Griffith as you have known him in the past.

It was Mercedes McCambridge in this movie, who was also in the original version of All the King's Men. Patricia Neal was great in Hud.

Lonesome Rhodes (to Marcia Jeffries): "Gimme a chance to lubricate my adam's apple! (swigs some booze) ...Nothin' like a little snake medicine to put ya in the mood! ...Oh, a guitar beats a woman, ANYTIME!! ...You know, I never have seen a woman I could trust like this ol' guitar... She's always there waitin' for me to pick her up and hold her... Never asks me for money, or goes cheatin' around when I ain't lookin'... And if she gets a little sour, why, I just give her a little twist, like so, and we're right back in tune together!"

General Haynesworth: "We've got to face it. Politics have entered a new stage - the television stage. Instead of long-winded public debates, the people want capsule slogans: "Time for a change." "The mess in Washington." "More bang for a buck." Punchlines, and glamour."

Lonesome Rhodes: "I'm not just an entertainer. I'm an influence... a wielder of opinion... a force! A force..."

(both men believing they're off the air) Actor on Rhodes' show (about Senator Fuller): "... can you really sell that stiff as a man among men?" Lonesome Rhodes: "To those morons out there? Shucks... I could take chicken fertilizer and sell it to them as caviar. I could make them eat dog food and they'll think it's steak. Suuure, I got 'em like this... You know what the public's like? A cage full of guinea pigs. Good Night, (you stupid idiots...) Good Night, (you miserable slobs...) They're a lot of trained seals. I toss them a dead fish and they'll flap their flippers."

There are no age suitabilities for this title yet.

There are no summaries for this title yet.

There are no notices for this title yet.

Find it at OPL